Deadline U.S.A. and the idea of virtue are amazing bedfellows to terrifically explain Virtue Theory in its character Ed Hutcheson. It also helps that one of the greatest actors of all-time, Humphrey Bogart, happens to be your lead. Virtue Theory, described by the best Green brother Hank in Crash Course Philosophy, as a theory that “emphasizes an individual’s character rather than following a set of rules.”

This idea is basically that one knows exactly what to do all the time, knows right from wrong, and overall can get along well with others. This character is, as Aristotle once said, “is developed through habituation – if you do a virtuous thing over and over again, eventually it will become part of your character.” This is exemplified in the portrayal of the aforementioned Hutcheson in the classic journalism film.

Deadline focuses on the closure of a newspaper The Day and their coverage of a scandalous figure by the name of Tomas Rienzi. When a reporter is beaten up by some hired goons of Rienzi, Hutcheson seems more determined than ever to report on Rienzi’s corruption and, with the paper’s future looming, ensure The Day gets out the truth before being bought out by rival paper The Standard (A brief aside before we get into the analysis: the film is absolutely incredible. It’s one of the best used in this class and absolutely phenomenal). Back on topic, let’s focus on the journey of Hutcheson and how well Bogart exudes the Virtue theory in the film, as well as another previous written about.

“About this wanting to be a reporter, don’t ever change your mind. It may not be the oldest profession, but it’s the best,” a drunken Hutcheson tells an aspiring reporter after learning about The Day’s looming death. Hutcheson himself is devoted to the paper and the idea of hard-hitting journalism and Bogart carries that ideology in his performance. Every line and action taken by Bogart feel real and reflects the determination of his character. Hutcheson asks the paper to go in on Rienzi with a cartoon showing him as a monster with the cutline “let them prey” while also asking for more leads on the stories surrounding.

From there, there are connections a plenty with Sally Gardner’s murder being tied to Rienzi as she was her lover and how they will still run a story, even if it means losing advertising dollars. They even get her boxer brother Herman to come in to talk about Rienzi since Rienzi had ties to the corrupt boxing commission by promising him safety and money to be away from Rienzi’s malice.

Yet, all these risks and moment are summed up rather well when Hutcheson defends The Day at the hearing to determine whether or not it will be sold to The Standard, a rival paper less determined to report hard news and more focused on puzzles, horoscopes and sensationalist news.

“Right now, it’s the only paper willing to expose Rienzi. An honest fearless press is the public’s first protection against gangsterism, local or international…Because without competition, there can be no freedom of the press. And I’m talking about free enterprise; the right to the public to the marketplace of ideas, news and opinions, not of one man’s or one leader’s or even one government.”
– Ed Hutcheson (Humphrey Bogart)

Hutcheson, even in the wake of The Day’s eventual death, is still determined to give the truth and give the public what is important and what is right. This also works a bit in tandem with what was discussed in utilitarianism a few weeks ago in regards to the other-regarding side of it. As described Hank Green in Crash Course Philosophy, “we should always act so as to produce the greatest good for the greatest number.” Hutcheson is determined to do just that with his virtuous mindset. 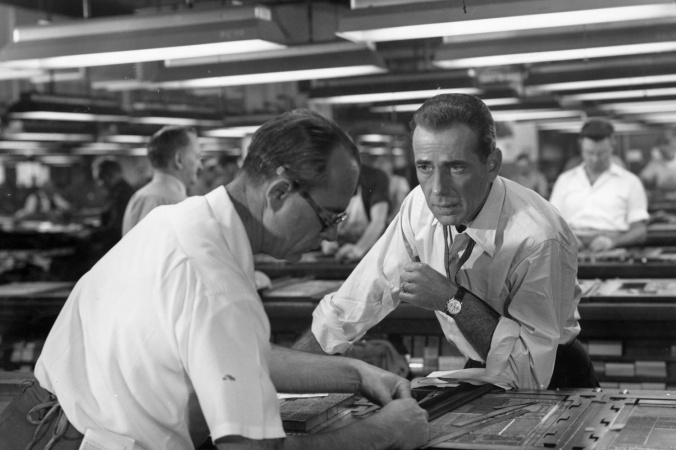 An “Ed” of the Curve – Ed Hutcheson, played by Humphrey Bogart, in the printing press with a worker at The Day

I’ve gone over long on this, but it does seem to feel akin to a penultimate endcap to what has been discussed. Many of the films watched in this course can be valid material to work with the Virtue Theory as well. From the Boston Globe uncovering the Catholic Church sex scandal in Spotlight, showing the evils of the cartel in Mexico in Reportero, reporting the news the mainstream prejudice press would not in Soldiers Without Swords or delivering the harsh reality of a war-torn nation in Control Room, all these have a virtue in themselves to deliver the news and facts the public should and do care about.

That in itself is what makes the journalism profession fascinating. In the words of Ed Hutcheson, “a profession is a performance for public good. That’s why newspaper work is a profession.”